Andy, you grew up in a famous musical family, can you share with us what that was like?

My earliest and fondest memories involve music. I was three years old and I loved music. I loved strumming away on my air guitar, belting out gritos, feeling the keys of the piano, and pretending that I was the front man for my favorite band, La Lluvia. I would sing the words with such gusto and emotion and who knows how many Spanish words I said incorrectly, but I loved music and felt it running through my veins. My dad realized my love for singing was only growing stronger and got tired of hearing my echo through the TG&Y plastic microphone so one day, he came home with a professional grade microphone. Remember, I was only three years old and it was heavy and bigger than my head, but I loved it and would belt out “Pensando en Ti” (original song recorded by La Lluvia) for the family every chance I was given. I carried my microphone with me everywhere. I slept with it, took it to the dinner table with me, and watched cartoons with it on my lap. This year, my mom re-gifted me with my beloved microphone and it is on display in my music room reminding me of my roots. At any Chavez get together it is a guarantee to find guitars and a lot of singing. Music has always been at the center of our family and what we do. We play music to celebrate birthdays, holidays, and the passing of loved ones. Music is our way of communicating. What would excite me the most is when my grandpa, the late Julian Chavez, would pull out his harmonica and start singing, especially “Vuela Paloma” and “Volver”. The passion and emotion in his singing and music was genuine and what I always hope to embody. With his lead, we would only sing louder and strum harder. My grandpa’s love for mariachi music rubbed off on me and in 10th grade I joined Mariachi Sol del Valle and learned to play vihuela. I went on to join Mariachi Aguila del Norte while attending Northern New Mexico College, and since, I’ve played with various groups at many venues throughout the Southwest. Music has shaped my life and I will continue with the tradition of creating and recording music for as long as I can.

Your new song, ‘Los Tres Amigo’s also features your dad Andy Chavez and your uncle, Steve Chavez, can you tell us about this song, why you chose it and what it was like to record with your famous family members.

At the start of my project, I planned out various songs that I wanted to record and although I was not sure of what the actual song would be, I planned to record a song with the men who continued on with my Grandpa’s legacy and the men that I looked up to, my dad and my uncle. I searched for an upbeat song that would showcase all three of us and one that we would have fun doing together. I knew the song needed to have some accordion and a three part vocal harmony, so “Los Tres Amigos” it had to be. “Los Tres Amigos” was originally recorded by Tejano music legends, Little Joe Hernandez, Ruben Ramos and Roberto Pulido. I grew up listening to these iconic artists since I was a little boy. My dad introduced me to Tejano music at an early age and it holds a special place in my heart. While in the studio, I felt that the recording needed to have gritos to showcase the energy of the song. Automatically, I assumed my dad would do the gritos, but childhood memories came fleeting and I belted out the gritos for the song. Mimicking my dad’s gritos at three years old really paid off. The three part harmonies came natural and like the song title suggests, we really are Los Tres Amigos. We had a great time singing and laughing. The song has been well received by the listeners and a lot have said it brings back some great memories of “The Lluvia Days”. This project was an experience I will never forget and it was an honor to record alongside my idols.

What was it like recording ‘Los Tres Amigos’ wth your dad, Andy Chavez Sr. and your uncle Steve Chavez?

Both my dad and uncle enjoyed recording this track as much as I did. Throughout the recording session they both exclaimed it was just like back in the day, three Chavez’ in the studio, having fun, and doing what we love.

Tell us why you chose to follow in your dad and uncle’s footsteps and become a solo music artist.

I have always looked up to and aspired to record music like my family’s band, La Lluvia. La Lluvia had many talented members including my dad (Andy Chavez Sr.), my uncle (Steve Chavez), my late uncle (Randall Chavez), Jerry Atencio, and the late Carlos Archuleta. I looked up to them and still do for my musical inspiration. I love their unique sound and incorporate it into my style and recordings. All three of the Chavez brothers are powerhouses and have amazing voices. I started playing bass and really appreciating the instrument because of the way my Uncle Randall played his bass, with tremendous heart and soul and with such smooth technique. Bass guitar has become my favorite instrument to play. Over the years I have had the privilege to perform with many talented artists and groups. I was introduced into the New Mexico music scene at the age of 20 playing alto saxophone and was instantly hooked! I would later be playing sax, vihuela, or bass on any given weekend, having a blast with my musical friends. I have met so many wonderful musicians through the years that have become like family and I cherish the memories that we make. For years, family members would ask me, “When are you going to record your own music?.” I would simply chuckle to the question. It was not until my grandpa passed, a couple years back, that I really felt the urge to do something different and maybe do my own thing. It had been years that I sang in front of anyone, and honestly, I was nervous.  I was a little shy with my voice at first, but with the encouragement from my wife I ended up calling my Uncle Steve and booking a studio session. After recording and releasing my first single, that was it and I wanted more! I have recorded instruments in many projects throughout the years, but when I was in the studio working on my own music, it was a utopia I wanted to revisit. What made it even more awesome was the fact that my Uncle Steve and I were in the studio collaborating, creating and having a blast together. I learned so much from being in the studio with him. He is a wealth of knowledge when it comes to arranging and recording and I am forever grateful for the experience. During my recording sessions, the style and sound that I wanted to achieve was a mix between New Mexico and Tejano music.

What awards have all you received for your music?

In January 2020 I was honored to receive nominations in two categories at the New Mexico Hispano Music Association Awards Show. The first nomination that I received was for Traditional Ranchera Song of the Year with my take on “Voy Navegando”. The other nomination was for a newly created category, Tejano Fusion Song of the Year, for my cover of a cumbia, titled “Amame”. I was truly humbled to be nominated in this category as Tejano music has been a huge part of my musical life and where I derive a lot of inspiration from. All four songs I released have hit the music charts at KDCE and KNMM. In fact, “Los Tres Amigos” was number five last week on KDCE’s Top 20 Countdown. I am truly grateful for the support that I have received from the listeners and radio DJs. It has been a wonderful journey so far and I am blessed with all the people I have met along the way.

Andy, what are your future aspirations as a music artist?

The pandemic has really put a damper in the release of my first CD. The project is nearly complete and I had plans to do a CD release party and celebration, but with the current health orders and the fact that I would never want to endanger others, I may have to hold off on the celebration. I hope to release the album soon. As for now, I am having fun recording and already have songs lined up for the next album. I plan to continue the tradition of my family in this musical journey.  I am excited to reunite with my musical family and friends, and I look forward to jamming on stage again once we return to a normalcy.

I thank our Lord the all mighty for granting me the musical ability to reach out and touch hearts with my music!      “Que viva nuestra gente y nuestra musica nuevo Mexicana para siempre!” 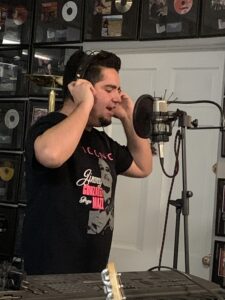 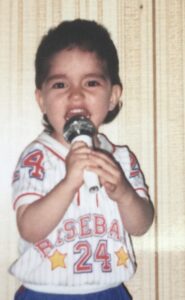 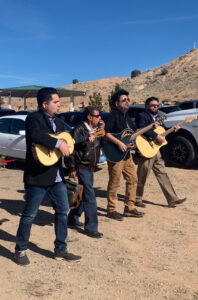 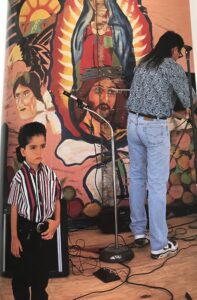